Rethinking the Future of a City

Ben Wolfe
phrawr
Curator’s note: We are excited to welcome urban designer, Sean Galloway, to Peterborough tomorrow as guest “provocateur” and context-setter for ReThinking Citizen Engagement in Peterborough. This story highlights what was possible in London, Ontario when Sean and others dared to reimagine what an official city plan could look like. Learn more about tomorrow’s event and register here.

Rethinking a city’s entire official plan is a once-in-a-career opportunity for many planners. Some never get the chance.

When the City of London, Ontario began the process four years ago — a complete rewrite of a plan originally approved in 1989 — its planning team set out to accomplish something few cities have imagined or tried: putting the topic on the public’s lips, making it a subject of wide discussion, and emerging with a clear consensus on a shared vision.

They began in uncharted waters. When they were done, they had completed the most successful public engagement process in Canadian municipal history, full of lessons about what other communities can make possible.

The Elephant in the Room

The first step was facing a reality London planner John Fleming called “the elephant in the room.” People don’t come to public meetings on a 20-year planning horizon for their city. They don’t relate to planning in that way. Holding traditional planning meetings at city hall sends a message that the content “must be bureaucratic, legalistic, or political in nature,” John has written.

“And, the term public meeting has its own connotations that conjure images of long boring presentations followed by an hour or more of comments by the same small group of people who have been involved in these discussions for years. Why would an average Londoner attend such an event?”

So London’s team did it differently, with a multi-part strategy for breaking through the noise and making the process count.

First, they branded the discussion with an approachable name that cut through planning jargon to the essence of what they aimed to do: ReThink London. ReThink London launched with an attention-getting, media-savvy public event. 1,300 people filled two convention centre ballrooms to hear Peter Mansbridge give a talk about seizing the moment, and what it’s like to report from places where it is not possible to exercise the privilege of citizenship.

The launch began a more than a year long community conversation, with anyone who would take part. Municipalities typically hold four or five public meetings as part of a planning process. London held more than 100.

Meeting People Where They Gather

A few were of the traditional style. The rest were open-ended workshops and discussions with groups of citizens all over the city, on their own terms, in places and groups where they already gather.

There were many other creative approaches. Planning staff came to summer festivals and asked people what they do and don’t like about the city. They created an online “visual preference survey” that let people share and comment on photos of their most and least favourite places.

Two leading Canadian urbanists, Brent Toderian and Ken Greenberg, were brought in to share their expertise on the most promising approaches tried by other cities.

Urban designer Sean Galloway, the co-lead of the public engagement process, ran an event at a public library, live-streamed over cable TV to groups at multiple other branches, that used a Canadian Idol style approach and voting software called PollEverywhere to gather opinions from over 500 participants. “I felt like Peter Mansbridge that night,” he chuckles.

Even more importantly, starting well before the public launch, the planning team nurtured a team of community champions — leaders and connectors in neighbourhoods, ethnic communities, and constituencies of various kinds — and this opened the door to conversation in important places.

For example, community champions engaged members of the southeast Asian community whose personal history gave them good reasons to be skeptical of meetings with government.

And about 150 people attended a richly successful workshop at a homeless shelter.

To focus the conversation the city found straightforward ways to show what was at stake. The most effective was putting a 50-year price tag on more and less sprawling patterns of development. A lot of people, including the business community and those interested in fiscal responsibility started paying attention when they learned a compact form of development is projected to cost $2.7 billion less in public infrastructure and $70 million less a year in operating costs than a “business as usual” growth pattern for the same population.

More than 17,000 people engaged face to face with ReThink London. Many more engaged in other ways. There is a new level of interest in, and knowledge of, urban issues as a result, and the public engagement process shaped the priorities and language of the drafts of the plan.

“It gives strength to the final product,” Sean says. “This is democracy at work. Politicians are saying they should wrap the budget process around it. The business community is saying we’ve got to do this.”

People haven’t traditionally come to public meetings on a 20-year planning horizon for their city — but over 400 people attended the public release of of the first draft of The London Plan in May 2014. Video links had to be set up to two rooms of overflow seating.

The planning team received a standing ovation, from both politicians and citizens.

The result, Sean says, is that “When it comes time for implementation, you’ve already poured the foundation for the community’s involvement.”

This article is an updated version of a story originally published by Axiom News, the founding organization of Peterborough Dialogues, in September 2014, after the release of the first draft of The London Plan. 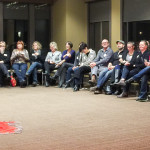 Our High River: A Citizens Summit for a Town’s Desired... Previous
Creating an Invigorating Conversation About the Future... Next 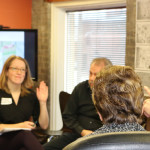 Ben Wolfe is a co-creator of the Peterborough Dialogues. He brings deep engagement in the transition narrative and 25 years of experience in media as a vehicle for community-building and social change. Ben’s design and communications work has won national, regional and local awards. He has worked as a newspaper reporter/photographer, and as writer, editor and designer of a wide range of print and online publications. He is a past director of communications of local and national NGOs including the Canadian Unitarian Council, and a co-founder of Peterborough GreenUp, a hands-on, solutions-oriented local environmental action project, now in its 23rd year.