Ralph Gutkin
3
Curator’s note: Peterborough Dialogues welcomes Ralph Gutkin in a blog series exploring an alternative response to the criminality crisis which currently strains society financially and emotionally. His blogs will move through the depths of the concern into what can our region can do about it.

We all pay a staggering cost for crime  ­— ‘we’ being victims most noticeably, but also children, other family members, neighbours and friends, employers, government, the general public and the offender.

There are many factors that lead to the commission of crime, and every situation has its own unique variables. That said, it is abundantly clear that poverty, unemployment and lack of education represent a significant contribution to criminality. The authors of the Fraser Report that I referred to in my first blog, highlight the research which shows that as a group, convicted offenders often have relatively low levels of education and less employment. They comment: “Employment plays a large part in society and detachment from work prior to incarceration is common among offenders. In 2003/2004, 45 per cent of those incarcerated were unemployed (yet able to work) prior to incarceration while 42 per cent were employed (Beattie, 2005). Five years later there has been little change: 47 per cent of inmates were unemployed prior to incarceration while 41 per cent indicated they were employed) at least part time (Calverley, 2010).”

Dr. Isobel Findlay, a University of Saskatchewan professor who has been studying worker co-ops and their value in the rehabilitation/re-socialization of Aboriginal women presented a paper, Through the Eyes of Women: Co-ops, Incarceration, and Integration at the ICA Research Conference on Co-operatives and the World of Work held in Turkey in November 2015. Her findings are very consistent with other research and point to the impact of the systemic problems leading to criminality and the compounding impact of incarceration: “The interviewed women demonstrate that criminality is often the by-product of adverse life experiences, trauma, grief, and impoverished living environments that remain largely unaddressed by current correctional policies. The study’s interviews confirm that individuals who come from impoverished environments are disproportionately overrepresented amongst those who offend, and that education and work-related skills generally deteriorate as a result of incarceration, exacerbating their difficulties and adding new social stigma as criminals.”

The Who Pays study* focuses on the same cyclical impact of poverty and imprisonment: “The research in this report confirms that the financial costs of incarceration and the barriers to employment and economic mobility upon release further solidify the link between incarceration and poverty.”

When you read the plethora of literature on the cost of crime and its correlation to societal ills and shortfalls, you have to seriously question why we seem not to be addressing needs that are clearly evident. And then add in, what we know of recidivism or the likelihood of reoffending. While, the numbers are not consistent, they are disturbing:

So are there measures that can reverse these trends? I will address that in ensuing posts.

*For those of you who are interested in studying the issue of the costs of crime on the offender, his/her family and consequently the larger community, I recommend looking at Who Pays? The True Cost of Incarceration on Families which is produced by the Ella Baker Center for Human Rights in the United States. It speaks to the legacy of decades of a very ‘tough on crime’ criminal justice system that “last(s) for generations and (is) felt most deeply by women, low-income families, and communities of color (which in this country, we know, includes our Indigenous population)… The repercussions of these policies extend far beyond sentencing and incarceration, affecting the employment, education, housing, and health of individuals and their families for years to come.”

The executive summary can be found at: http://www.campaignforyouthjustice.org/collateralconsequences/images/resources/Who_Pays.pdf

The full report at: http://whopaysreport.org/who-pays-full-report/

Part 1 — Exploring a Community-based Response to our Criminality Crisis

Part 5 — A Co-operative Approach to Reintegration 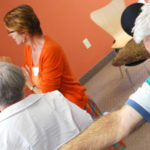 Exploring a Community-based Response to our Criminality... Previous
What Will Become of Peterborough Dialogues? Next