The space held by a gathering of new and practiced hosts/facilitators at the Axiom News office this week carried a rare and refreshing spirit.

Steeped in deep listening, openness, trust, care and camaraderie, the gathering included room for both frank dissension as well as healthy exchanges of support and wisdom.

The sense was that deep listening, holding space and being present was enough.

One of the challenges identified, for instance, is finding one’s way as a host/facilitator between providing too much structure versus providing too little structure, or over-facilitating versus under-facilitating. What’s just the right amount of framework required to create the conditions for people to discover and live into their own agency, within a certain context?

In responding to this challenge as a group — as was the case with every scenario/issue put forward — there was much less a drive to find immediate and agreed-upon answers as there was a quiet holding of all that came up. The sense was that deep listening, holding space and being present was enough.

A closing round invited the dozen or so participants to express what they were taking away. What came up – angst, deeply felt energy about a new revelation, confusion, a clearer sense of one’s calling — was another testament to the space being held. An experience in walking alongside one another, by opening our hearts, offering unconditional support, and letting go of judgement and control. 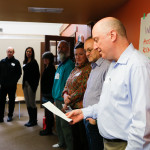